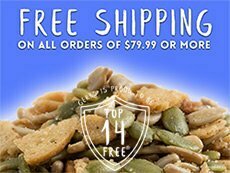 We love adding our Dried Goji Berries onto of breakfast oatmeal yogurt bowls ... so yummy!